The horrific incident in Woolwich in the last week has led to a massive spike in fascist activity throughout the country. Yet again London came under threat from the activities of far right extremists looking to politically exploit the murder of Lee Rigby. This time it was the BNP who before the day of their planned march were denied their initial route in South London. This was due from the considerable threat of disorder that might have ensued if the police allowed fascists to march to Lewisham.

So like before we teamed up with the new comrades from the south London antifascist group and mobilised again to get more of an autonomous crowd out to oppose the fascists. Around 200 met at the imperial war museum in Kennington, south of the river. A minimal police presence joined us, along with the usual police surveillance teams. After setting off as a bloc, led by a Lambeth Unison banner, we took the road and marched towards Westminster. As we approached Westminster bridge people in their cars started sounding their horns in support, with several busses coming past us on the other side of the road doing the same, one driver giving us a fist salut! Nice! It definitely felt a lot lot different than last Monday when the EDL were in town. 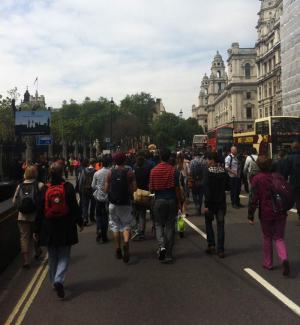 200+ on the autonomous antifascist march

As we approached Whitehall the main bloc moved towards the cenotaph and towards the UAF’s stationary demonstration, already neatly inside their police provided pen. The autonomous antifascist crowd chanted for the UAF to join our demo, with a few dozen leaving the pen for the streets. Down from Trafalgar Square, a group of around 30 masked antifascists, many with “Anonymous UK” flags, marched towards us to join in. The police at this point were fairly stand offish, enabling us to form up, at this point we must have numbered around 250.

As information came through of BNP members arriving, a call went out to move antifascists closer to their meet up point at Old Palace Yard, opposite Parliament. As we arrived, the crowd rushed the barriers in an attempt to block and surround them. Police at this stage became a little more proactive. As the area was swarmed by antifascists, lonely looking BNP members who had hoped to attend their furher’s ego tripping media spectacle were pounced upon and told in no uncertain terms to fuck off. This happened periodically with fascists hounded and ran out of the area by a combative crowd. After a while the police start to try and make snatch arrests, they were hampered in the process by people successfully snatching back their comrades and linking arms. Which is a simple but effective way of stopping the police from kidnapping you!! However the lines were held and numbers were swelled thanks to the many hunt sabs who were in town for the anti badger cull march who came down after their march also in Westminster. 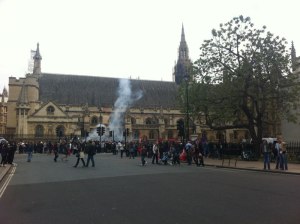 Finally about an hour or so of blocking any attempts for the police to march the BNP to their proposed destination of the Cenotaph, UAF turned up with around 200 people and stood around 50 metres away, linking up arms. This was of course was great to see, and with extra people it meant that the police couldn’t drive us off the streets. However, there were elements of sectarianism which meant that they were not proactive sooner, really had no tactical clue from the start of the day of what may happen and what it is actually going to take to have a victory against the far-right on the streets.

We were now still there blocking the area for over 2 hours, when two red London buses appeared on the other side of the police cordon, near the BNP. We imagined they were for the BNP to bus them safely home. But they had a more sinister purpose. With no arrests ( after some successful de-arresting ) the cops imposed a Section 14 order which designates official protest areas and we all potentially faced arrest. With no tactical purpose in moving us on, the police charged forward periodically, snatching people and using the buses as transport to London police stations.

In total, around 60 people were arrested – all antifascists. If you were arrested or witnessed any arrests then please get in touch the Green & Black Cross at gbclegal@riseup.net or 07946541511 – who as ever have done a fantastic job at providing legal support. Those arrested were also put on disgracefully oppressive bail conditions which banned them from all protests and Westminster till mid July. Please check the legal links to find out about challenging bail conditions and whether it’s ok to ignore them especially if people plan to go to the upcoming G8 protests in June.

We also found ourselves having to see off the most pathetic group of soggy EDL losers ever in whitehall! We all couldn’t get over how pants they were. Not really worth reporting on!

Yesterday was a great victory as the politics of hate didn’t manage to get a decent platform at all in central London. The BNP’s opportunism fell flat on it’s face and was rightfully opposed. If we can keep this momentum going then we can hinder any attempts for the far-right / nationalists / no surrender mob to get organised and start imposing their reactionary, “patriotic” bullshit onto the young minds of working class youth. With many attacks on our communities by capital in the form of falling incomes, attacks on welfare and support for the most needy in our class – the alternative is there to be built.