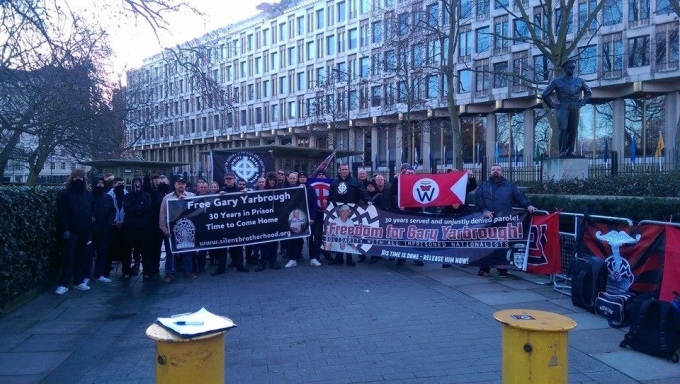 1pm Saturday 23 May
Outside the US Embassy
Grosvenor Square

David Lane was a founding member of American neo-Nazi terror group The Order. He died in 2007 serving a 150 year prison sentence for his neo-Nazi activities. When The Order murdered liberal Jewish talk show host Alan Berg, Lane was the getaway driver. Lane was also a member of the Ku Klux Klan and coined the infamous “14 words” slogan, popular on the far-right.

On Saturday 23 May neo-Nazis will gather outside the US embassy to pay their respects to this racist piece of shit. This will be the third neo-Nazi protest supporting terrorists to take place outside the US embassy in the past six months. We say enough is enough, fascist events in central London need to end.

We are calling on anti-fascists from across the south east to join us in showing these muppets they cannot hold protests in London unopposed. We will not let scum like Lane be remembered as anything other than a fascist thug who did the world a favour when he departed this mortal coil. Fuck him and the fascist scum who want to celebrate him.

More details on the far-right protests are available on libcom.org. 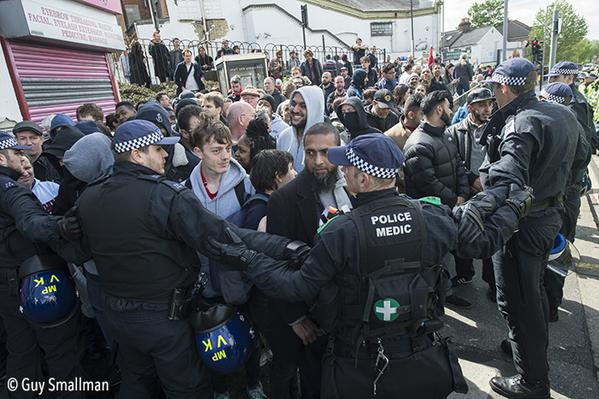 The English Defence League (EDL) returned to Walthamstow last Saturday and once again were only able to march through the borough because of the police. Hundreds of riot police, not-so-undercover cops, attack dogs, police land rovers, coaches, trucks, horses and a helicopter were mobilised by the state to facilitate the march, but even this could not stop anti-fascists from making it clear to the EDL they were not welcome in Walthamstow.

We spent time in the run up to the day strengthening our community links and leafleting to promote the protest outside Blackhorse Road train station. We had called for people to gather outside the station to block the EDL march. But the police didn’t appear to be overly keen on this happening, so by the time most of us arrived the protest had already been pushed onto Forest Road, which the EDL were going to march down.

200 anti-fascists from the AFN and autonomous anti-fascist groups were slowly pushed all the way along the route of the march by the cops who repeatedly threw soft cordons around small sections of the protests, re-enforced them and then detained or dispersed those inside the cordon. Had anti-fascists been a bit more organised, this tactic may have been possible to resist but it wasn’t. Several anti-fascists broke away from the march and doubled back on the police while others went and joined the Unite Against Fascism rally outside Walthamstow town hall.

When the EDL last marched in Walthamstow it looked like a complete disaster for the organisation, they had only been able to mobilise 200 people. This time they set off with less than 100. Anti-fascists blocked their route and had to be pushed back by lines of police. The police had surrounded the gaggle of EDL with riot police and then surrounded them with even more riot police, with horses in front and vans behind. Proving once again veteran anarchist Albert Meltzer’s maxim that there is no such thing as a fascist march, only a police march. 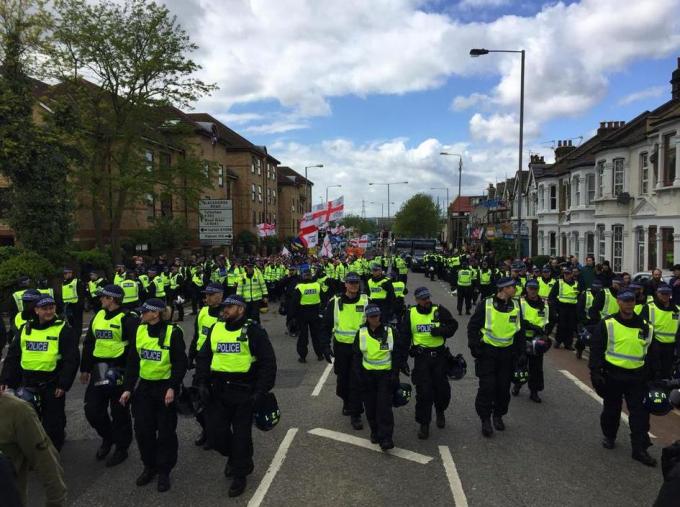 The chants of “if it wasn’t for the coppers you’d be dead” were heartfelt, enjoyable and made a pleasant change from the usual anti-fascist repertoire of “alerta, alerta” and “whose streets”. As the EDL held their rally, anti-fascists prepared for their return to the station back down Forest Road. By the time the EDL reached the station the police had to fight back a crowd of anti-fascists who very nearly broke through police lines.

We believe the day was a success, despite the heavy policing. We mobilised a large militant group who slowed down and disrupted the EDL march. The EDL were basically driven through the area like a herd of diseased cattle and prevented from contaminating the area by many hundreds of police. Banned from pubs and being escorted en masse is hardly going where they want.

On 9 May the EDL hope to make their return to Walthamstow in East London. Their reasons for marching have become redundant and irrelevant; an EDL march is one thing: a violent, racist mob which seek to intimidate, harass, and attack communities in the name of nationalism.

They state that they intend to “make it clear we CAN and WILL protest in any town or city in this great country of ours!”. The last time the EDL attempted a march in Walthamstow they were met by fierce community resistance which refused the limits imposed by both the police and polite protest and went ahead to meet them with force. It was a disastrous and embarrassing defeat for the EDL and an example of the collective strength of black, brown, and white working class people fighting against a common enemy.

The decision to return to Walthamstow could not come at a more ill-advised time for the EDL. Their call out has been met with derision and criticism from across the far-right and from within the ranks of the EDL itself. One racist Facebook group have called it “the dumbest idea we’ve heard in a long time”, adding “last time there were a good few hundred lads who could defend themselves. They are all long gone”. With the loss of any semblance of competent leadership, and the diminishing morale of their support base, the EDL is on it’s last legs.

It’s not all good news though – the EDL is still able to attract several hundred supporters to their national demos. The splinter groups they have spawned and the political space they have opened up has contributed to a massive upswing in far-right street activity across the UK in recent years – much of it openly fascist. We must continue to organise and build a militant anti-fascist movement capable of meeting these threats head on.

On 9 May we believe we have an important opportunity to deliver one of the final blows to the EDL and finally wipe this decrepit movement off the streets. We are calling for large scale mobilisation to prevent the EDL march from taking place, by all means necessary. We are calling to #BLOCKEDL in Walthamstow. Help spread the word and start making plans.